Calls for changes to a key disability benefit to be given priority by the government are being spearheaded by the country’s lead campaigning multiple sclerosis charity. It is also championing efforts to influence the agenda of a cross-party MS group.

People who have the disease joined representatives of the UK’s MS Society to deliver an open letter to Downing Street, calling on the prime minister to end unfair PIP (Personal Independence Payment) assessments.

“More than 21,000 of us added our names to the letter in just four weeks, sending a clear message: changes to PIP must be top of the agenda for the government,” said a spokeswoman from the society.

Ashley, who like me lives with MS, said: “I knew coming to London would take everything I have physically, but people need to know about this indignity, and the government must act now.”

The society has raised the issue elsewhere too. It has met with disability minister Justin Tomlinson, and with the companies that provide PIP assessments.

“We won’t stop calling for change until PIP makes sense for people with MS,” the spokeswoman added.

In another move, the society has asked members to help decide what issues should be raised with the All-Party Parliamentary Group for Multiple Sclerosis (APPG). This is a group of MPs and peers in Westminster committed to working on a wide range of issues that affect people with MS.

Another society spokeswoman explained: “In March, we’ll be bringing together the APPG with people affected by MS to discuss what MPs could do to better support them. 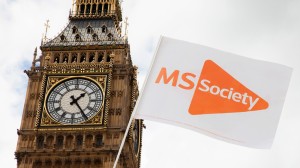 “To help us decide the issues we raise, we wanted to hear from MS Society members. We asked what one change, big or small, would make the biggest difference to their lives.

“We are happy that the responses will help make sure MS is on the political agenda.

“All members’ thoughts will be discussed by the APPG and a group of people with MS, who will look at the best way to raise those issues in the parliament,” she said.

In the general election in December, a group of new MPs was elected to represent people across the country. This is a great opportunity to work with those MPs to make sure MS is high on their lists of interests.

Let’s hope the efforts are successful.